Becoming a music therapist is not as simple as majoring in music and minoring in psychology or vice-versa. Some professionals say a minor in psychology can be beneficial for entering the field. However, a student with a major in psychology and minor in music is not eligible to sit for the certification exam.

“A bachelor’s degree in psychology or music that is not music therapy or that is offered by a school not accredited in music therapy does not prepare a student for the professional practice of music therapy,” says Dr. Cathy McKinney, Music Therapy Program Director at Appalachian State University’s Hayes School of Music.

According to the American Music Therapy Association (AMTA), curriculum for a music therapy degree includes coursework in music therapy, psychology, music, biological, social and behavioral sciences, disabling conditions, and general studies. Piano, guitar, and vocal proficiency are expected and are the most frequently used in therapy.

Students in a music therapy program also receive clinical experience outside of the classroom, typically partnering with on-campus clinics or facilities serving individuals with special needs in the community.

So do I need a master’s degree?

Lalene Kay, director of the Cleveland Music Therapy Consortium (consisting of Baldwin Wallace Conservatory, The College of Wooster, and Cleveland State University), says there are some hospitals and facilities that prefer master’s-level training for supervisory and manager-level positions. “Some music therapists will consider graduate work and explore a master’s in music therapy,” she adds, “or look to other areas to strengthen their skills, knowledge and abilities in a population-specific focus such as Master’s in Social Work, Communication Disorders, Child Life, Gerontology, Neuroscience, Psychology, Counseling, Early Childhood Education, to name a few.”

Others believe advance training in music therapy is now more important than ever, particularly to become more competitive in the market. “The American Music Therapy Association is in the process of determining whether or not to require a minimum of a master’s degree,” says Dr. William Davis, director of the undergraduate program in music therapy at Colorado State University and chair and director of graduate studies in music for the department. “This is likely to happen within the next 10 years or so.”

Dr. Darlene Brooks, director of music therapy at Temple University’s Boyer College of Music and Dance, believes students should consider a master’s degree shortly after their internship. “The bachelor’s degree serves as an excellent foundation for the young music therapist to work with clients in a general way,” she says. “The needs of clients extend beyond what the bachelor’s music therapist can provide, and the master’s degree is needed in order to understand the depth and breadth of practice.”

What if I already got my degree in another area of music or a different field altogether but I want to enter music therapy?

Dr. Feilin Hsiao, associate professor of music therapy at the University of the Pacific Conservatory of Music, encourages students who have earned a non-music degree to complete music prerequisite courses first. These include music theory, music history, conducting, and piano, guitar, and vocal proficiency.

What employment opportunities are available for music therapists?

Students who earn a degree from an accredited music therapy program have numerous opportunities to practice. Program directors say their graduates have accepted jobs in a variety of settings, including:

Because of most programs’ internship and clinical requirements, students are able to obtain employment before or soon after earning their degree.

According to Wilson, Western Michigan University has had an almost 100% placement rate within three months of graduation for the past several years, and other schools seem to be reporting similar findings.

Baldwin Wallace has seen its graduates find employment at many major cities around the country. “We have recent alums working with community programs which service adults with developmental disabilities, autism and severe/profound physical and neurological disorders in Indianapolis and Pittsburgh, as well as hospice programs in Maryland and Cleveland,” says Kay. “Most recently, an employed alum was hired by the agency in San Diego where she completed her six-month internship. She now heads a new program she helped pilot during her internship.”

What are some challenges music therapists face?

Many professionals acknowledge that a general lack of awareness and understanding of the field is the biggest challenge. This can lead to new graduates struggling to find jobs, particularly in parts of the country where music therapy is less well-known. “The larger metropolitan areas are where the majority of the full-time jobs are,” says Davis. “Those in areas outside of cities sometimes have to create their own positions or set up a private practice.”

Another challenge, according to Brooks, is the number of clients music therapists are expected to see in a given day. “Once facilities recognize the value of music therapy, they want all of their clients to have the service,” she says. “Balancing that request with good treatment is a challenge.”

The field is also ever-changing and rapidly developing because of new uses of music, the emergence of new populations in need, and more specific applications of music therapy interventions. McKinney says that music therapy for premature infants in neonatal intensive care is a good example of how the field has evolved.

“As recently as 15 years ago, there was very little literature in this area and few music therapists in NICUs,” she says. “Now there are at least three books on the subject, a growing research base that has shown the cost-effectiveness as well as precautions and contraindications, and an increasing number of NICUs seeking to hire music therapists who have expertise in this area.”

If You Didn’t Major in Music Therapy

If you’re considering or currently attending, or have graduated from a school that does not offer music therapy but are interested in entering this field, read: Equivalency Program in Music Therapy. 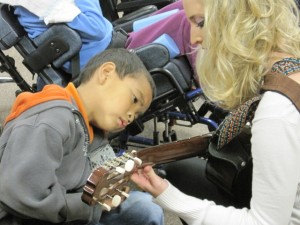 How Do I Know Music Therapy is Right for Me?

Music therapy is not an easy field to go into. While a passion for music is necessary, there is rigorous coursework and training that goes into it. Experts agree that students who are looking at music therapy programs should be comfortable interacting with others, particularly individuals who have disabilities or medical conditions. Wilson encourages prospective music therapy majors to volunteer at a local nursing home or help with Special Olympics to better assess if they are a “good fit” for the demands of the profession.

“A prospective music therapy major must be an excellent musician and willing to learn a variety of instruments such as guitar, piano, autoharp, hand percussion as well as be comfortable with singing,” says CSU’s Davis.

McKinney at Appalachian State’s Hayes School of Music adds that a commitment to lifelong professional development is essential, as the field continues to grow and evolve. Music therapists attend conferences, continue education in music therapy and related areas, and stay up-to-date with the literature.

“While this is true of most professions, it is perhaps more imperative because the profession is young,” she says. “I have been a music therapist for more than 35 years, and the profession now bears little resemblance to the one I entered.”

Music Therapy Programs
at these Sponsoring Schools on MajoringInMusic.com

Other articles to consider: 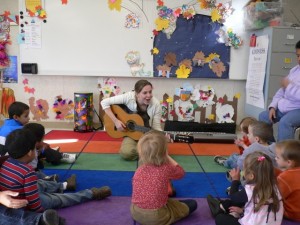