The field of arts management – a.k.a. arts administration, music management, and more – offers an array of opportunities for students who have a passion for music and are also interested in behind-the-scenes operations.

What is Arts Management?

Arts management blends the artistic and business elements of a career in the arts. Depending on where your interests lie, arts management offers many paths.

While arts management is largely associated with the non-profit sector, there are numerous opportunities with for-profit companies. Students from arts management programs also go on to work with operas, symphonies, dance companies, record labels, digital streaming companies, and more. Some become self-employed and open their own studios or create chamber ensembles.

Arts management is a great option for musicians who would like to have a stronger business background. “Being an artist in the 21st century takes more than just doing your art,” says Jennifer Clary, director of marketing for Colorado State University’s Center for the Arts. Along with the traditional music courses, arts management students learn to better market themselves, understand accounting and finances, and discover ways to overall enhance their careers as artists.

Constance DeVereaux, an associate professor at Colorado State, has been involved in arts management for many years and has done extensive research in the field. “It’s not enough just to be a brilliant violin player,” she says, “if you have no clue how to promote yourself.” She goes on to say that arts management programs not only train those who want to manage themselves or promote their own artistic careers, but also provide people skills necessary for working in the non-profit or public sphere.

Approximately 40 undergraduate and 60 graduate programs throughout the world are members of the Association of Arts Administration Educators (AAAE).

One of the oldest U.S. members of AAAE offering undergraduate training is Baldwin Wallace University. Its Arts Management Program allows students to choose a major or minor in the arts and combine it with a business major or minor.

“The great thing about this program is that every student has a somewhat unique skill set and group of experiences from any other graduate,” says Bryan Bowser, director of the Arts Management Program. “We try to work with each student to identify their interest areas, passion, and strengths that align to a career path, a way to be successful in the arts with a stable career.”

The program also has a rich partnership with Cleveland’s Playhouse Square, the second largest theater complex in the country. Third-year students help put on its annual International Children’s Festival, and seniors, in their last semester, conduct a major market research study and produce a show for the company. This partnership, along with the program’s internship requirement, allows students to apply their studies to real-life experiences.

A newer program at Colorado State University is LEAP (Leadership, Entrepreneurship, Arts Advocacy, and the Public), which offers a minor in Arts Leadership and Administration to undergraduate music, theater, dance, and art students, as well as a Master of Arts Leadership and Administration graduate program. The degree program is in conjunction with the College of Business. “To have the marketing and economics input from that (business) program is really critical to the overall success of the LEAP program,” says Jennifer Clary.

Like Baldwin Wallace, Colorado State has partnered with the hub of its arts community, the Arts Incubator of the Rockies. This collaboration, along with the City of Fort Collins, allows the program to give students high quality education and training, hands-on experience, and a platform to share ideas and develop as a 21st century artist.

The University of Southern California’s Thornton School of Music offers the Arts Leadership (ARTL) Graduate Certificate Program, which is geared primarily toward professionals in various arts fields who want to further develop the necessary skills to become strong arts leaders. The program is comprised of a gateway course led by Former Chairman of the National Endowment for the Arts Dana Gioia, four core and four elective courses, and a year-long practicum.

“Students need to think about themselves and their career in a more entrepreneurial way, a self-directed, individualized way,” says Kenneth Foster, the department’s director.  They need to keep up with a “radically changing and changed world.” The ARTL program, he adds, helps students consider what makes them happy and what they can do with their career.

Arts Leadership is also available now as an area of emphasis in USC’s two-year Master of Public Administration program. Foster anticipates additional MA degrees with an Arts Leadership emphasis will be developed in other schools in the coming years.

At the University of the Pacific Conservatory of Music, students in the Music Management program focus specifically on the various aspects of music industry, including fundamental marketing, finance, recording, and legal knowledge. Since its founding in 1982, the Music Management program has evolved to include classes in performing arts management, music products, and running a student record label.

Students audition for admission into the Conservatory of Music before being able to pursue a Bachelor of Music or Bachelor of Arts degree in Music Management, while no audition is required to pursue the Minor in Music Management. The program also has an internship requirement, which is vital to help students temper their areas of interest, according to Keith Hatschek, the program’s director.

Since there are more arts management programs at the graduate level, some professionals suggest getting an undergraduate degree in music and taking courses in business and marketing. According to Kenneth Foster at USC, ideal candidates for graduate programs like his are students with an undergraduate degree in music who’ve been out working in the field in some capacity and are ready to take their career further. “They are ready to think critically about what they’ve been doing in the past, and where they go from here,” he says.

Those who pursue undergraduate arts management degrees do not necessarily need graduate level training, says Bryan Bowser. “We don’t find very many [students] who go on to graduate school immediately,” he says. “They are definitely prepared for entry level positions.”

For those who do go on to graduate school, Bowser strongly encourages getting real-world experience first. “It is so valuable having had some experience,” he says, “to confirm what part of arts management is most interesting to you.”

“Look at the quality of professors and quality of students who came out of [the program you’re interested in],” DeVereaux suggests. “Where did they work? Did [the program] have a good reputation? What is the focus of the program? Wherever you go, that’s where you’re going to do significant networking, not only with your peers in class, but also with the community.”

The Path to Arts Management

Some people fall into arts management and administration positions through internships or interest in policy-making, education, etc. Many are able to continue practicing their art in some way, while holding stable, lucrative careers.

Michael Millar, director of the Center for Community Engagement at California State Polytechnic University in Pomona, has had a rich career in arts administration. With a background in bass trombone performance, Millar ended up getting a DMA in Performance and Arts Administration at Claremont Graduate University. For more than 30 years, he has been able to continue performing on bass trombone while serving positions such as executive director of the Arts Council of Kern and arts commissioner of the City of Santa Clarita. “I believe that musicians these days have to have diversified careers,” he says.

Though his educational background is in music performance, Deven Shaff has been active in arts management for several years. As the former operations manager and then executive director at The Dairy Center for the Arts, an educational and performance venue in Boulder, Colorado, he oversaw programming and events, collaborative opportunities, and other operations.

As an undergrad, Shaff fell in love with opera. “I started to be involved in every aspect of it: onstage, behind the stage, everything that had to do with opera,” he says. Over the next few years, he walked the paths of both performing and working behind-the-scenes. He sang in operas while holding administrative roles through internships, but “knew there would be a crossroads,” and he ended up transitioning into administration.

Roy Holloway, director of Fine Arts for the Boulder Valley Schools, says he knew he wanted to be a school administrator by the time he was 15. He asked his high school principal and teachers for advice on what he needed to do to become a principal, and they told him to get his undergraduate degree and teaching certificate, teach for a while, and then go to graduate school.

Holloway was involved in music from an early age. “That was my love, that was part of me,” he explains. “So I auditioned at Bowling Green State University in Ohio, got in with a scholarship, and everything went forward from there.”

Holloway’s path illustrates an important decision-making step, which was asking advice from professionals in his field of interest. According to Shaff, informational interviews with experts are key to enhancing your own education and career. “You’re asking how they got where they are, why they enjoy what they’re doing, poking to find out what they do in their job, what are the skills needed,” he explains.

Wanting a path that could mesh her interests in both the arts and human development, Gerstle pursued a degree in music therapy. After working at a community music school in Cleveland, she earned a Master’s in Education and went on to become the executive director of a national non-profit advocating educational reform before joining From the Top. “I never let go of the power of how arts can be instrumental in creating an incredibly robust and inspiring learning environment for kids,” she says.

How Do I Know if Arts Management is the Right Fit for Me?

For music majors, getting involved in arts management must stem from a passion for music and the arts. 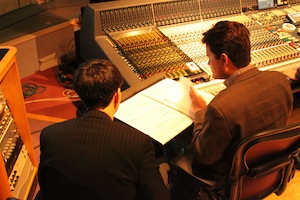 …has become one of the most vital fields for graduates of arts administration programs. According to the latest report from Americans for the Arts, the non-profit arts industry produced more than 4 million jobs and generated $135 billion of economic activity. Those who pursue this route become involved in the operations of arts organizations at various levels.

Tips for considering a career in arts management