Sacred music programs at various colleges and universities offer many opportunities for students interested in pursuing a career in the field.

What can I study if I’m interested in sacred music?

Many colleges and universities offer sacred music programs, with focuses ranging from organ and keyboard pedagogy to choral conducting. With such a variety, it is best to do some research on existing programs to find one best suited to your career goals. For example, the Sacred Music program at Appalachian State University’s Hayes School of Music is geared mostly toward Christian music. Dr. Joby Bell, program coordinator, sees the university’s location in the Blue Ridge Mountains as the primary reason for this focus.

Appalachian State’s Sacred Music program is comprised of a basic music curriculum, including music history, theory, conducting, etc., but also courses specific to the degree: Liturgies, Sacred Music Literature and Materials, Service Playing or Pedagogy and Literature, and Organization and Philosophy of Church Music, a hands-on course dealing with the “nuts and bolts” of the job. Students must have a part-time internship to complete the degree.

At Capital University’s Conservatory of Music, students in the Keyboard Pedagogy program can choose an emphasis in Church Music, which focuses on piano and organ pedagogy, literature, choral conducting, and a year of service playing. Students can also pursue an emphasis in either Organ or Piano Pedagogy, and piano students are required to take organ lessons as the secondary instrument. “This prepares them well in musical services at churches,” says Dr. Tianshu Wang, head of the keyboard department.

The Benjamin T. Rome School of Music at The Catholic University of America offers graduate-level training through the Institute of Sacred Music. “Both degree programs [MMSM and DMA] offer concentrations in choral music, organ and composition, though the breadth and scope of the program affords and requires training in all areas,” says Dr. Leo Nestor, director of the Institute of Sacred Music and Director of Choral Studies.

For students interested in Jewish sacred music, there are a handful of programs throughout the country, including a few prestigious cantorial schools. Students enrolled in the Debbie Friedman School of Sacred Music at Hebrew Union College-Jewish Institute of Religion spend their first year in Jerusalem, and must complete one year serving with a congregation on their own by the end of their fifth year. At the Jewish Theological Seminary’s H.L. Miller Cantorial School, students in the intensive graduate program study cantorial modes and chants, Hebrew, advanced music theory, clinical pastoral education, Jewish music education, and more.

Jewish music programs like the one at Indiana University’s Jacobs School of Music prepare students interested in cantorial training. Developed in consultation with both the Debbie Friedman School and the H.L. Miller Cantorial School, IU’s Jewish Sacred Music curriculum teaches music theory, history, vocal training, and more alongside Jewish history, texts, philosophy, and culture, while giving students opportunities for working with cantors from the area and participating with the local Jewish community.

While some universities do not offer a specific sacred music program, most music curriculums cover the topic in history courses. There are also other ways to learn more about and get experience in this field. At Northwestern University Bienen School of Music, students can sing in the Chapel Choir. “The repertoire is wide and varied, offering those interested in church music a good background in the rep,” says Dr. Donald Nally, professor of Conducting and Ensembles.

And at Bowling Green State University’s College of Musical Arts, students can study choral music education as an undergraduate or graduate, or choral conducting as a graduate student. “The study of choral music includes much sacred repertoire,” says Dr. Mark Munson, director of Choral Activities. “One of the three graduate choral literature classes that we offer is titled ‘Music of the Church.’”

What job opportunities are there in sacred music?

The field of sacred music offers numerous career options. “Count the number of churches with fine music programs in any given city, then multiply it exponentially,” says Dr. Nestor.

Positions in the church or synagogue include choral conductor, piano or organ musician, music director, and cantor. “Some of my students have gone back to their hometown area and are working in churches,” says Dr. Bell. “Everybody seems to be fairly busily employed.”

According to Stephen Martin, director of Music & Worship at Azusa Pacific University, “Not only are the expectations for today’s music ministry settings quite high in terms of excellence and ability, they are quite diverse in scope as well. Graduates from Azusa Pacific University are stepping into ministry roles such as:  Worship Arts Director, Creative Arts Pastor, Choir Director, Orchestra Director, Arranger, Composer, Worship Leader, Program Director, Children’s/Youth Choir Director…the list goes on.  Churches are often designing positions around the needs of the church and the strengths of the candidate.”

There are numerous jobs behind-the-scenes as well, such as composing. “There is a very large sacred music publishing and recording scene,” says Dr. Judah Cohen, Jewish Studies professor at Indiana University. The research and academic fields also offer career opportunities for scholars of sacred music.

A sacred music background can also earn you a position abroad. Thomas Bara, Chair of Piano, Organ, Harp & Percussion at Interlochen Center for the Arts, taught a student who became the Organ Scholar at the Canterbury Cathedral in England. Closer to home, his students have gone on to become organists at large churches throughout the U.S. as well as gone on to attend Yale’s Institute of Sacred Music.

Many programs have seen high employment rates among recent graduates. “Almost all of our graduates obtain positions in synagogues right after they graduate,” says Cantor Nancy Abramson, director of the H.L. Miller Cantorial School. “They work all over the United States and Canada, in medium and large synagogues.”

“There’s always some church in need of some musical help of some sort, whether it’s playing, conducting, organizing, or getting the program back on its feet,” adds Dr. Bell.

Do you need to be a sacred music major to get a church or temple music job?

Some specific jobs within a church or synagogue require the proper schooling. “Most synagogues now hire cantors who have been ordained by a school,” says Cantor Abramson.

However, for accompanists and other instrumentalists, it may be more of a matter of proficiency and hands-on experience. Cantor Dana Anesi, director of student placement at the Debbie Friedman School of Sacred Music at Hebrew Union College-Jewish Institute of Religion, says that a strong music background can be sufficient for those positions as opposed to the intensive training cantorial students are required to undergo.

“If it’s a mega church with guitars and amplifiers, I think that if you play rock music reasonably well, you have what you need,” says Dr. Munson. “If you want to work in an Episcopal church that has high musical standards, you probably need to be an accomplished organist and choral musician.”

So while a sacred music degree is beneficial, many believe that a strong skill set may be more important. “I think that someone with good choral skills and background who has a good knowledge of church tradition and scripture could serve successfully in a variety of churches,” offers Dr. Munson.

For example, Professor Nally did not earn a sacred music degree, but ran the music liturgy program at St. Mark’s Church in Philadelphia for seven years with his background in conducting. “While a sacred music curriculum undoubtedly equips one with essential information about these liturgies and resources to apply them,” he says, “one can find the information outside of school if one is curious enough.”

Dr. Nestor lists several opportunities for those who wish to take part in sacred music: volunteer and professional singers, assisting organists, orchestral players, rehearsal pianists, vocal coaches, and librarians. However, a sacred music degree can help secure a higher position. “Leadership is best entrusted on those who have prepared for the life,” he says. 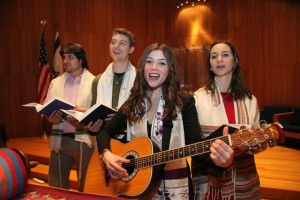 Most professionals say that while a graduate program in sacred music is not necessary, it doesn’t hurt if the student wants to pursue further education. “Grad school is a great time to hone a craft, soak up expertise at a time you are better equipped to understand it, read as much as you can, and learn vast amounts of rep,” says Dr. Nally.

Dr. Munson believes that while grad school is not necessary, it is certainly beneficial. “We should all learn as much as we can about what it is we do and practice our skills,” he says.

Students who earned an undergraduate degree in sacred music can pursue a master’s in the area they want to specialize in, such as organ performance or conducting. “Whereas many good schools and departments of music will offer a generic curriculum in sacred music, the prospective graduate student is best served by choosing the finest school in the denomination which s/he expects to serve,” says Dr. Nestor.

Does graduate school make you more employable? “It depends on the church,” says Dr. Bell. “A bigger church in a bigger city might prefer a master’s degree.” 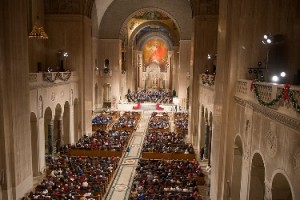 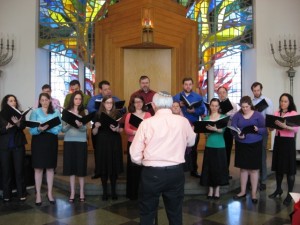