College a cappella groups offer music majors and non-majors alike the chance to share their love of singing along with hands-on experience in performing, arranging, promoting, fundraising, and much more. Most groups are close-knit communities where members find a welcome niche while traversing the highs and lows of college life.

Jacob Koressel, a graduate of Indiana University, says he joined the all-male group “Straight No Chaser” (SNC) to get involved in a music ensemble “outside of the traditional choir experience. The group definitely changed my college a cappella experience for the better, both musically and socially,” he says. “The guys I was in SNC with are still some of my best friends.” Original members of SNC went on to record a contract with Atlanta Records in 2008, and the Indiana group changed its name to Another Round to avoid confusion. Koressel, who now teaches high school math, continues to attend the group’s annual winter and spring concerts and fill in for Another Round members on an as-needed basis.

Regardless of their major, members of a cappella groups learn to hone their musicianship, says Thomas J. West, who received his bachelor’s degree in Music Education from Penn State School of Music. West performs with the professional a cappella group KeyStone, teaches instrumental music at Pennsylvania Leadership Charter School, and is director of education at The A Cappella Project in Philadelphia..

College a cappella groups offer members “a chance to arrange, transcribe, and learn choral skills; the opportunity to put shows together; the experience of learning about the voice as an instrument; and the ability to perform,” he says. It also allows members to develop essential workforce skills. “A cappella requires you to be a team player and do what’s best for the group,” says West. “This is a skill that employers are always seeking.”

“There are a lot of benefits from being part of In The Buff,” says Jack ‘GaGa’ Walker, a chemical engineering major and the business manager for the University of Colorado Boulder’s all-male a cappella group. “I think the most important one would definitely be the camaraderie. We spend so much time together as a group that we become really close. It’s really nice knowing that for two hours, three times a week I can forget about my problems, have fun, and sing with some of my closest friends.”

In The Buff alumni remain actively engaged with current members, come together for reunions, and assist one another in job searches.

Jack Strother-Blood, pre-Business, and Jasper Freedom, Music Composition, are both freshman at the University of Oregon. They are members of  UO’s all-male a cappella group On the Rocks (OTR). The group received national recognition through appearances on Seasons 2 and 3 of NBC’s “The Sing Off.”

The benefits Strother-Blood and Freedom have already seeing from being members of OTR are typical of what students gain by joining. “I had seen On The Rocks perform at my high school a few times and I enjoyed listening to them,” says Strother-Blood. “I thought it might be a good way to meet people. It turned out that I actually love it and I am so glad that I started as early as I did.”

With three a cappella groups to choose from at UO, students who want to sing are likely to find the right fit. The a cappella scene is “much more than just three groups singing every Friday at the EMU (Erb Memorial Union) on campus,” say Strother-Blood and Freedom. “It is a big family of people who, through singing together, become best friends.”

“Another opportunity both personal and professional,” Freedom adds, “is recording. OTR has the unique opportunity to work with alum and co-founder Peter Hollens on top quality recordings. Being a part of this process allows me to learn how it is done so I can apply it to my personal music, which will then help me with my career plans in music. I am also the new booking manager for OTR, so I get to make connections with professional people and represent OTR.”

What are college a cappella groups looking for in new members?

Daniel Weidlein, a jazz performance graduate (2012) of the University of Southern California Thornton School of Music, performed on Season 3 of NBC’s “The Sing Off” and sang bass in USC’s all-male group, The Trojan Men. He says, “A cappella groups are kind of like vocal fraternities, so social skills end up being a huge part of the audition process.” He and his fellow members looked for the following in new recruits:

Divya Maus, who graduated May, 2014 from USC Thornton School of Music as a music major with an emphasis in songwriting, was a member of USC’s co-ed a cappella group, Reverse Osmosis (RO). For RO, “The solo had to be interesting, both the choice of solo and how the person sang it. You can tell a lot about a person’s taste and musical ear based on that small solo.” She also emphasizes the need for prospective members to demonstrate “a readiness to try things and be open to our audition instructions. We loved the people who were shy about sight reading or not the most experienced musicians and were still totally willing to give it a shot. This showed that even if they weren’t trained musicians, they were eager to make the effort and learn. That eagerness was what made us take auditionees who weren’t as good at sight reading over other auditionees.”

Roots of A Cappella

A cappella, or singing without instrumental accompaniment, is one of the world’s oldest forms of music. Italian for “in the manner of the chapel,” a cappella has roots in religious music. It stems from centuries-old traditions ranging from Gregorian chants to Jewish cantillation, and has evolved into more modern styles such as barbershop and collegiate a cappella.

History of Collegiate A Cappella

The first college a cappella group in the U.S. was formed at Northwestern University in 1906; Yale University’s Whiffenpoofs came on board in 1909 and are thought to be the longest continuously-operating college a cappella group in the country. Since 1980, there has been a surge of a cappella groups on campuses across the U.S. According to The Contemporary A Cappella Society (CASA), co-founded in 1991 by Deke Sharon and Rex Solomon, there are now “tens of thousands of contemporary a cappella groups around the U.S. and world, ranging from high school and college ensembles to professionals and recreational groups.” Considered the “father of contemporary a cappella,” Sharon has gone on to produce NBC’s “The Sing Off” and to serve as on-site music director, arranger and vocal producer for the “Pitch Perfect 1” and music director for “Pitch Perfect 2.”

Another Round (Indiana University) 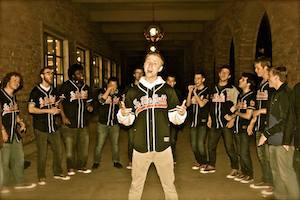 “Being in the group has helped improve my singing quite a bit. Some of the guys in the group are very knowledgeable on how to sing and are very helpful on how to combat issues and blend and tone. A cappella requires you to have active and on point listening skills in order to sound like a cohesive unit.”

Jack “GaGa” Walker, In The Buff

On The Rocks (University of Oregon) 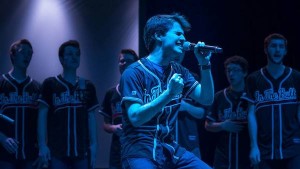 All Photos Courtesy of “In the Buff”

Caitlin Peterkin, a frequent writer for MajoringInMusic.com, contributed to this article.