What have music majors found most useful in their music school education? Music career advisor and consultant Angela Myles Beeching focuses on the importance of finding a mentor and getting involved in a challenging project as the two most impactful experiences a music major can and should aim for.

In an informal survey conducted over the years, I’ve questioned musician friends, colleagues, and alumni decades after they graduated, asking what actually mattered most in their college experiences. There have been two phenomena cited time after time, two kinds of educational experiences that made the most impact, no matter where, when, or what the individuals studied. And from watching hundreds of students make their ways through degree programs and on out into the world, I’ve observed that those who have had these experiences are the ones who tend to fare the best in transitioning to the professional world. If I had a magic wand to wave over every school’s curriculum deliberations, I’d wish these were the transformational experiences all students would have.

One of the most important experiences a college education can provide is that of making a strong personal connection with a caring faculty member who challenges, encourages, and dares the student to expect more of herself or himself. An ideal mentor is someone who coerces a student into having a more ambitious mission—not just a career—in life. Such mentors serve both as models and as mirrors, reflecting back on students a view of themselves as capable and full of potential. With such a mentor, a student dreams bigger. Music departments may have the advantage in this over others, since performance majors spend the most intense part of their programs studying one-on-one with a master teacher. However, true mentor-matches are probably made in heaven, not in studio teacher or advisor assignments; institutionalized mentoring programs often leave much to be desired.

The important thing is satisfying a student’s hunger for the attention of an inspiring adult role model and the challenge of working with a mentor. And schools can do better to help make more authentic, substantive mentoring possible. In the end, whether a student finds a mentor on his own, through a class, a work study job, or through a program, the objective is to make a connection with a trusted adult role model.

The Power of a Project

The second educational phenomenon I’ve found to have a lasting impact on students is the experience of becoming fully engaged in a challenging project, something that ignites her or his imagination and motivation. Projects that have lasting impact are those that demand the best of a student’s intelligence and put to the test her or his assumptions and worldviews. These projects (in the best cases) involve working closely with other students and one or more faculty members both on and off campus. Such projects can connect a student’s learning to a community beyond the campus and to a future the student can envision.

But the most important aspect of any student project—whether it is a thesis or a community service project, starting a concert or lecture series, or working as editor of a fledgling newspaper—is that it be fueled by the student’s initiative. The student ends up taking responsibility and therefore owns her or his learning. Such a project can be the light of an actual education, or the petri dish where critical thinking, analytical skills, communication, organization, and interpersonal skills are all developed. In the end, it’s where a student has the opportunity to discover her or his mission, and finally, to gain the confidence that she or he will live a meaningful life.

For any musician heading off to college or in the middle of a degree program now, I recommend making sure your education is the best it can be. It’s up to you. Ask yourself, who might be a good mentor? And, what project would you like to take on? 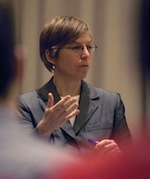 Music career strategist Angela Myles Beeching is author of Beyond Talent: Creating a Successful Career in Music and has advised hundreds of musicians on a full range of career-related issues. This article has been excerpted and adapted from a piece she originally wrote for New England Conservatory’s Career Services Center where she was director from 1993-2010. She has also worked as a consultant to the Indiana University Jacobs School of Music. She currently directs the Center for Music Entrepreneurship at Manhattan School of Music and maintains a thriving consulting practice, Beyond Talent Consulting.

Excerpted from “Curriculum Reform—A Perspective,” an article published in the Journal of the Music and Entertainment Industry Association Journal, 2005.

Copyright, Angela Beeching, July 13, 2011 (Reproduction granted with credit to the author and MajoringInMusic.com.)