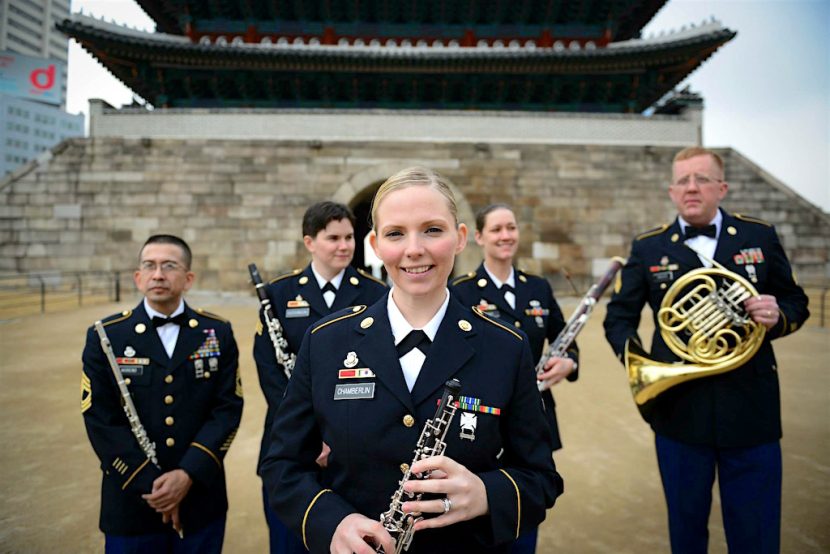 Curious about a military band career? Here are 7 reasons to investigate this option.

According to Sergeant 1st Class Bradford Danho, a saxophonist in the Jazz Ambassadors, the official touring big band of the U.S. Army, “My job is literally to play the saxophone for a living. We get to play jazz and represent the Army to people all over the country. It truly is a great opportunity!” He holds a B.M. in Music Education from the The Hartt School and an M.M. in Jazz Studies from the University of North Texas. In fact, all of the musicians interviewed for this article had equally impressive credentials as well as an interest in pursuing a life in performance.

While the repertoire is not always as varied since many performances revolve around ceremonies of one kind or another, if you want to spend your life playing music, this could be a good option.

If you’re reading this article, then you’ve probably accrued at least some student loan debt. The good news is that if you join a service band, the military may take care of some of that debt. On the other hand, if you have too much debt, the military may not allow you to join up. There doesn’t seem to be a specific dollar amount threshold. To learn more about your chances of joining a military band if you’ve accrued student loan debt, talk to a local recruiter. The rules do change, so be sure to get current information. At present, loan repayment is no longer available with the Army bands.

In addition to a signing bonus (not available through the Army bands), many of the musicians interviewed for this article cited the very reasonable full-time pay as an incentive for joining a military band. While it is unlikely that a person will become wealthy by joining the military, the salary, loan-forgiveness, and benefits (see #4) can be an enticing package.

All members of the military, including band members, get benefits. This includes health benefits, the Basic Allowance for Housing (BAH), and education benefits that can either be used by the service member or transferred to a dependent (child or spouse). Education benefits can vary, but individuals with the full Post-9/11 GI Bill and Yellow Ribbon Program eligibility may have their entire tuition and fees covered at most public and many private institutions.

5. You can have a life outside of the military.

Most of the individuals interviewed for this article pursue music as well as other activities outside of their military duties. Some gig with local symphonies, teach lessons, or are adjunct professors at local schools and colleges. The more a person travels, the harder it is to be highly consistent with outside music and other activities, but most military musicians are able to participate in some way.

Navy Musician 1st Class Jenny Stokes, who received her B.M and M.M. in Bassoon Performance from New England Conservatory, is able to pick up her kids from school. Army Sergeant First Class Alexis Bainbridge Sprakties, B.M. Horn, Indiana University Jacobs School of Music; M.M. Mannes School of Music – The New School; D.M.A (in process), University of Colorado Boulder College of Music, has an active freelance and teaching career on the side in addition to being a regular substitute with the Virginia Symphony and a high school clinician in the D.C. area.

That said, military responsibilities must come first. “If you agree to take a job as an adjunct professor or have a large lesson load, you have to make sure the people in that community understand that if a mission (performance) comes up last minute, you must complete that mission regardless of prior commitments,” says Army Staff Sergeant Victoria Eastman Chamberlin, B.M. Oboe Performance, Mansfield University; M.M. Oboe Performance and Orchestral Conducting, University of North Texas, and oboist in the 8th Army Band in Seoul, South Korea.

As a saxophonist with the Jazz Ambassadors, Bradford Danho has performed in every state except Hawaii.

Victoria Chamberlin says, “I wouldn’t have had the opportunity to live in Europe and Asia and immerse myself in another culture without the military.”

Alexis Sprakties recalls a memorable international trip: “Once I had the opportunity to play with my woodwind quintet at the border between North and South Korea and a North Korean guard listened from the other side of the fence. [He was] one of the most appreciative audiences I have ever had!”

7. It is unlikely that you will see combat.

Army Staff Sergeant Derek Stults, B.M. Performance and Education, the Hartt School; M.M. DePaul University; Professional Studies Diploma, Chicago College of Performing Arts at Roosevelt University, is a percussionist with the Concert Band within the U.S. Army Field Band. “Although I went through basic training, I was not required to go through any other combat instruction,” he says. “The military would exhaust every other resource that they have before calling me into combat.”

That’s not to say that you would never enter a war zone. “All marines, soldiers, and airmen that aren’t in a MACOM (major command) band or a premier band can be sent to a war zone to hold a gun,” says Petty Officer Third Class Ret. Joe Petrocelli.  “The Combat Zone airmen and soldiers would generally still play some ceremonial music, but would have to stand guard and the like.” On the other hand, members of the “President’s Own Marine Band” and the Coast Guard Band do not even go through basic training, and without combat training it is highly unlikely they would be deployed to fight.

In every branch, members are expected to perform collateral duties. For some, those duties are all music related. Coast Guard Musician 1st Class trombonist Sean Nelson, B.M, Sam Houston State University; M.M., University of North Texas, wears many hats: he is the arranger for the Coast Guard Band; he performs with the concert band and the Dixieland jazz band; and he is music director for the Guardians Big Band.

For other military musicians, however, collateral can include anything from office work to technological responsibilities to janitorial duties.

If you don’t relish frequent travel, you could be in for a rude awakening.  Some of the bands are on the road upwards of 100 days a year.

Although admission into any military band requires an audition, outside of the premier bands, the playing ability can vary dramatically from musician to musician, leaving some players musically unsatisfied.

Despite the downsides, a military music career is still a path worth considering. Staff Sergeant Courtney Morton, B.M. Cincinnati-College Conservatory of Music, M.M. Flute Performance, is a piccolo player in the U.S. Marine Band. She says, “Military bands offer you a life experience unlike any other civilian music job. You get to see and play for things that you wouldn’t normally have the opportunity to do.”

Alexis Sprakties agrees: she has performed for the President of the United States and for the Queen of England.

• To learn more about any of the bands mentioned in this article, including audition and recruitment opportunities, visit their websites.

• This article focuses on military bands in the U.S. only. Check options in other countries to learn what’s possible outside of the U.S.

Amy Mertz is a freelance writer who worked in admissions and community programs at the Syracuse University Setnor School of Music. She guided both undergraduate and graduate applicants through the admissions process, and also directed the Setnor Community Music Division.