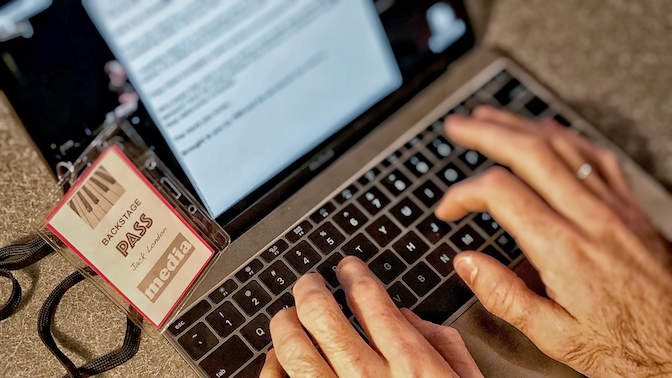 Music journalism is an ever-evolving industry for those passionate about music and writing. How do you know if it’s for you? And how do you get there?

Music journalism connects musicians and audiences, both new and established, through articles, podcasts, videos, and more.

It’s a hustling gig. A typical day for a music journalist might include:

How to Break into Music Journalism

“Journalism isn’t like medicine or law, where a specific degree is a stone-cold prerequisite,” writes NPR’s Stephen Thompson in his piece, How Do You Break Into Music Journalism?

Professional journalist, artist, and educator Jason King agrees. “There are many paths to become that kind of writer,” he says, “including the path of attending any university program that has a heavy emphasis on improving and honing writing and critical thinking skills.”

King, an associate professor and director of the Writing, History & Emergent Media Studies program at NYU’s Clive Davis Institute of Recorded Music, encourages students interested in pursuing music journalism to look for programs that offer a holistic approach. A well-rounded curriculum allows you to become “very well informed about music history as well as the music making and production process, and about the music industry itself.”

As already stated, there is no one right path to becoming a music journalist. And there are few undergraduate programs specific to this field. Consider combining undergraduate study in both music and journalism, either earning a degree in both or minoring in one.

As you research prospective schools, look for programs that offer:

• Flexibility and crossover between departments

• Faculty who are still active in the field

If you choose music as your major, build your journalism experience by joining student media outlets, writing reviews or hosting a radio show. If you’re on the journalism track, seek out electives like music history or theory, and gain exposure to as much music as possible.

Do You Need a Graduate Degree?

“You certainly don’t need an advanced graduate degree to become a music journalist,” explains King. “It can help you to become more informed, or it can even help you to get a certain type of job, but it isn’t the norm and it isn’t required.”

Some students choose journalism at the graduate level to gain experience they didn’t receive as undergraduates, to more thoroughly hone their writing and reporting skills, or because they’ve changed career paths.

At the graduate level, there are more niche programs tailored to music and/or arts journalism.

Ashley Eady originally set out to become an orchestral clarinetist. She earned a B.M. degree in 2014 from Vanderbilt University as a double major in Music Performance (clarinet) and French. But after graduation, she reevaluated her career path and decided to pursue arts journalism.

“Since I didn’t have a ton of journalistic experience coming out of college, I figured going to grad school would be a smart option to gain that experience,” she says.

Eady decided on University of Southern California’s Annenberg School for Communication and Journalism, which offers an M.A. in Specialized Journalism (the Arts). She received her master’s, finished a summer internship at The Wrap, a TV/film/entertainment website, and freelances while looking for jobs in radio or music criticism.

Jeremy Reynolds was in a similar position after graduating from Oberlin Conservatory’s Double Degree Program, with a B.A. in English Literature and a B.M. in Clarinet. Rather than pursue an orchestral career, he decided to apply to a mix of journalism and arts administration graduate programs before deciding on a master’s in Arts Journalism at Syracuse University’s S.I. Newhouse School of Public Communications. He went on to freelance for numerous publications before landing a job as classical music critic for the Pittsburgh Post-Gazette.

“While graduate school may be an option for some, other students have been able to thrive in music journalism without the need of a graduate degree,” says Jason King. By writing and building up a portfolio early in your undergraduate career, you may open the door to more options after you graduate.

Music journalist Bonnie Stiernberg graduated with a journalism degree from the University of Illinois, where she was active in student publications as a reporter and editor. She went on to intern at Paste Magazine, where she ended up serving as music editor until 2017. Now she freelances for publications including Billboard and Rolling Stone.

Stiernberg says she knew at a young age that she wanted to be a music journalist, and therefore immersed herself in as many media and writing opportunities as she could as an undergraduate.

“If you were coming out of high school, I’d urge you to go to college and immerse yourself in the student radio station, the student newspaper and any events programming board that will have you,” writes NPR Music editor and reviewer Stephen Thompson. “There comes a point (very early) in every journalist’s career when experience is far more important than what and whether he or she studied in school.”

Here are a few more suggestions for how to gain experience, build your résumé, and hone your skills:

Join your school’s publication, start your own blog, or work for a local publication or blog.

“The best way to become a good writer is by doing it a lot, by writing as much as you can, figuring out what works and doesn’t work. Writing gets better the more you write,” says Stiernberg. “You don’t major in music and not play your instrument—it’s the same kind of concept.”

“Even if you can’t find work writing for a publication, it’s very easy (and cheap) to start your own blog,” adds Eady. “Start a WordPress blog, and just write about music: album reviews, concert reviews, criticism, think pieces, playlists, or anything you can think of that’s related to music.”

Eady says: “Expose yourself to as much music as you can, and then write about that music.”

Faculty and staff at college and university programs are built-in resources for helping review your work or “clips” and résumé. They also provide key recommendations for internships and jobs, and facilitate the all-important aspect of networking.

Drew Hinshaw, Clive Davis Institute ’07, notes the importance of learning from and forming relationships with experienced faculty. “The professors and staff were the best part of the program for me, not just because they were New York City music world veterans, but because they were generally fun, thoughtful people full of ideas and conversations that were new to me,” he says. “Lean on [professors] for advice and get to know them.”

5. Put yourself out there

“Go to as many shows as you can,” says Eady. “And when you go to concerts, talk to people….Introduce yourself to the people standing around you, be friendly, and start a conversation. You may end up meeting someone who could help you in your career!”

Bonnie Stiernberg urges new music journalists to hang in there: “Don’t get frustrated if you don’t get where you want to be right away. It takes a while to build up clips and get your résumé to a point where you can pitch somebody at Paste or Pitchfork or Spin or Rolling Stone.

Music editors are busy and receive a lot of emails each day, so your emails may slip under the radar. “It’s important for young writers to not get discouraged if they don’t hear back on a pitch, or if they submit résumés regarding internships (and don’t hear back). Keep trying, don’t be afraid to follow up.”

The most common tip working music journalists offer is to have passion for the job.

“This isn’t a direction to go in unless you really love it, but if you do, there are opportunities to use these skills, even if not directly related to music journalism,” says Jeremy Reynolds.

How Do You Break Into Music Journalism?