Music Therapy: Making a Difference One Note at a Time

Music therapy is the use of music by a trained and qualified music therapist to achieve non-music goals. It is a recognized health profession in which music is used to address physical, emotional, cognitive, and social needs of clients as assessed by a degreed- and board-certified professional. Activities may include creating, listening, analyzing, moving, singing, and/or playing. Treatment may be provided in a group or individual setting for specified amounts of time and frequencies.

Music therapy is used with babies, children, adolescents, adults, and geriatric clients in a variety of settings, including (but not limited to) nursing homes, hospitals, schools, early intervention centers, hospice programs, rehabilitation facilities, and day clinics. Music therapists may be employed full- or part-time by a specific company or organization, or be self- employed and serve on a contractual basis.

What Music Therapists Do

Music therapy is a highly-structured form of therapy that utilizes music specifically selected for each client and setting. It differs from music education in that music education focuses on teaching a specific music skill (such as singing on pitch or playing in rhythm), whereas music therapy emphasizes skills that can be transferred to other areas of the individual’s life (such as learning to cope with stressful situations).

Music therapy also differs from other forms of therapy in that it is non-invasive. Although it may not cure, it can provide unique outcomes that may otherwise be difficult to achieve. Music therapists often work in conjunction with other professionals (speech/language pathologists, occupational and physical therapists, medical specialists, psychologists, and other creative arts therapists) as part of an interdisciplinary team. They may help to coordinate programming or offer suggestions, materials, or recommendations on how to motivate the client or continue the music experience after the therapy session has ended. Music therapists also work with families, providing important insights into loved ones’ needs and capabilities.

Music has been found to be effective in reducing pain sensations and anxiety, lowering blood pressure, alleviating fatigue, and enhancing literacy skills. It is useful for improving goal achievement, social skills, communication and on-task behaviors. It has also been shown to help organize information and physical movements, and transform aggression and hostility into creative self-expression. Music may be used to develop leisure skills, improve self- and other-awareness, decrease impulsivity, provide opportunities for memory recall and emotional intimacy, and serve as a stimulant or relaxation tool. It is processed in both hemispheres of the brain and involves all of the senses, thereby engaging participants at many levels and in a non-threatening manner. Music therapy is designed to be enjoyable and success-oriented, creating a safe environment where clients may experience the joy of music and be motivated to try new opportunities.

If You Didn’t Major in Music Therapy

If you’re considering or currently attending, or have graduated from a school that does not offer music therapy but are interested in entering this field, read: Equivalency Program in Music Therapy.

Check out the Music Therapy Programs
at these Sponsoring Schools on MajoringInMusic.com

Music therapy is evidence-based, meaning there is research to support its effectiveness with various populations and causes. It is also clinical, which means that the treatment is planned and outcomes are documented.  The process is “purpose driven” and includes assessment, treatment, planning, therapeutic intervention, and evaluation of each client.  It is a systematic approach, beginning at whatever level of functioning the client is at, and gradually increasing the demands to influence change in specified behaviors to help the client achieve targeted goals. 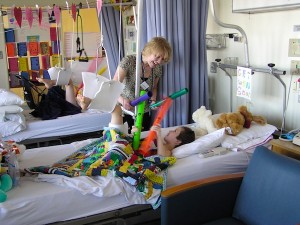 Music therapy is used successfully to ease the symptoms of Alzheimer’s Disease. According to the American Music Therapy Association, it can reduce depression, enhance social skills, help with memory and language skills, and lessen problem behaviors such as agitation and aggression.

A bachelor’s degree in music therapy (including an internship) and board certification through the Certification Board for Music Therapists (CBMT) opens the door to most jobs involving music therapy, according to Dr. Elaine Abbott, chair of Music Therapy at Duquesne University’s Mary Pappert School of Music.  For positions in hospitals, including psychiatric facilities, a master’s degree is typically required. Of the 72 schools listed by the American Music Therapy Association( AMTA), 33 offer advanced training at the master’s level.

In both the clinical and lay literature, there is evidence that music therapy is being used successfully to help those suffering from Post Traumatic Stress Syndrome (PTSD), which often afflicts soldiers after combat. Music therapy has also been used to support traumatized refugees, young people suffering from abuse and the effects of armed conflict, and families of returning soldiers and veterans.