Starting a Business as a Music Major

How does a music major shift gears and start a business? Ask John Knific, pianist-turned-entrepreneur. He’s living proof of how vision, hard work, and a commitment to turning failure around to meet customer demand have resulted in success.

Knific was a double-major in biology and music at Case Western Reserve University, with plans to go to medical school. In his junior year, he had what he calls an “Aha! moment.” The rest is history. Along with Marc Plotkin, an audio recording technology/music industry guy and Eric Neuman, a software engineer, Knific started planning a business in earnest. Their original idea didn’t pan out as hoped. But the three founders listened, corrected their course, and DecisionDesk, the company that may be ensuring your recorded prescreens and auditions are seamlessly sent to music school evaluators, was born.

Knific graduated from Case Western in 2009. Today he’s CEO of DecisionDesk. He also mentors entrepreneurial students at Oberlin College, through its Creativity and Leadership Program.

Knific spoke with MajoringInMusic.com to offer his best tips to students thinking about taking the entreprenuerial route to realizing their dreams.

Can you give us a quick overview of your journey as an entrepreneur?

I caught the entrepreneurship bug in my junior year of college. I remember the night. I was sitting at my computer, frustrated with how terrible MySpace Music was, thinking there had to be a more professional way to share performances. Then it clicked: “Why don’t I make something better?” I walked over to talk to my roommate, Marc, who was studying audio recording, to share my idea. He loved it. That was the beginning of the end of my medical school career plans.

The next few years were not quite as romantic. We founders had to forgo paying jobs and graduate school. Even my music was sacrificed, as I had less and less time at the piano. We started out trying to build a social network for music students. It failed miserably. We turned our product into an online video audition tool for music schools.

This was a turning point. We began having some traction, started rapidly growing our client roster, and eventually raised seed capital from an angel investment network. Fast forward two years, I’ve raised over $2 million in venture capital, now have 15 full-time employees, work with over 100 universities, and we’re just getting started.

What are a few of the tradeoffs of starting your own business?

A big tradeoff is the amount of time it takes to start your own business. It’s a long-term investment. Most entrepreneurs can’t pay themselves very much when the business starts, and you’ll put in many more hours than if you were working a “normal” job. The benefit is that it’s an investment in yourself and what you’re passionate about. I can’t see myself doing anything else right now.

What’s one of the most important things you learned as a music major that you can apply to being an entrepreneur?

Structuring your time in the practice room and setting goals is important. This relates to entrepreneurship. Early on, there are a million things you can work on at your startup. It’s very easy to keep busy, but it doesn’t mean you’re productive. I think it’s helpful to set achievable milestones like “I will call ten potential customers and get one to commit to trying my service.”

Describe some advice you’ve found helpful in starting your business that you’d like to pass on to others.

Be a good listener. It’s important early on to meet with people, build a network, and get advice.

You also need to identify who your customer is and understand their “pain points” inside out [i.e., difficult and urgent problems needing to be solved]. This process is called customer discovery, and it’s a crucial exercise before investing any time or money into your product or service.

Failure is OK! You will be told “no” frequently when starting a business. The founder of Pandora, one of the most popular internet music services, was rejected by over 300 investors when raising capital!

What’s the most common mistake the students you mentor face when thinking about starting a business?

The most common mistake is putting too much thought into how cool the idea is and not into the value for the customer. My biggest recommendation is to spend time with your potential customers and understand what will make them part with their hard-earned dollars. Solving this is the biggest hurdle. Unlike in the movie “Field of Dreams,” just because you build it, it does not mean they will come!

What about funding a new business?

Funding a startup is a complex issue. First and foremost, you have to decide if you want to bring on funding. Most startups are not a good fit for the strings that come attached to venture capital, which is intended for high growth technology companies.

You want to start by talking to people in your industry and make connections to prospective investors. It’s a learning exercise, and your initial meetings will be over coffee, lunch, or beers.  Raising capital is more of a networking exercise with the occasional formal “pitch” that involves a presentation. Most young entrepreneurs don’t realize that the networking portion is the most important part,

You’re a busy guy. How do you continue to fit music into your life?

It’s tough. Startup life can be all-consuming. My wife (a vocalist) and I still perform when possible, and play for fun at home. My classical chops aren’t what they used to be, but I still love playing. Funny enough, there are a lot of musicians working at DecisionDesk. One of these days we’ll have to put a company ensemble together! 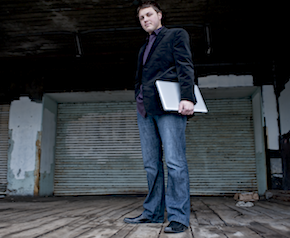 The next few years were not quite as romantic. We founders had to forgopaying jobs and graduate school.

Even my music was sacrificed, as I had less and less time at the piano. We started out trying to build a social network for music students. It failed miserably.

We turned our product into an online video audition tool for music schools.