Musical theatre* training offered through music programs instead of theatre schools and departments provides unique opportunities for students. While theatre and dance are still major components of these programs, the emphasis is on music.

Students attending music school for musical theatre work to become “genuinely fluent in the music aspect of musical theatre,” says Dr. David Herendeen, director of Opera and Musical Theatre at Oklahoma City University Wanda L. Bass School of Music. Theory, aural skills, sight singing, music history, and musical theatre history are important elements of the curriculum. Scott Plate, chair of Music Theatre at Baldwin Wallace University Conservatory in Ohio, says, “With a more thorough grounding in music theory, a secondary instrument and ensemble, a student is more musically prepared for life as a music theatre professional.” Herendeen adds, “The music theatre market expects effective rendering of text and characterization in a variety of song forms and styles for a variety of consumers.” Students study this in great detail and depth.

The music point of entry into musical theatre typically prepares students for crossover work. Eryn LeCroy, a recent Oklahoma City University graduate in musical theatre/vocal performance, spent the summer advancing her training by participating in the young artist program at Seagle Music Colony in New York. She is now performing the role of Miss Carew, Jekyll’s fiancée, in the national tour of “Jekyll and Hyde: The Musical.” She says that musical theatre students are required to audition for the operas in addition to the musicals performed at their schools. “Musical theatre majors must learn how to prepare a classical audition package to add to their standard repertoire.”

* Some schools label their programs “musical theatre” while others call theirs “music theatre.”

Every musical theatre student is typically trained as a “triple threat” (singing, acting, dancing). But according to Herendeen, an internationally-recognized performer, director, and teacher, the threats need to go beyond those three to include “fluency in the language of music, knowledge of the American songbook and its styles and history, genuine knowledge of rehearsal/production protocol, the art of auditioning, how to market oneself, and the ecosystem of the industry in the city center in which you want to work – Chicago, New York City, L.A., Dallas, Miami all have different consumer demands.”

Ann Evans Watson, an actor/singer/dancer and musical theatre coach, emphasizes that students need to be trained in microphone use and “the science of sound.” In addition, she stresses the importance of body work practices such as Alexander Technique, Feldenkrais, and Laban, for fine-tuning one’s performance.

Allison Verhofstadt, currently a musical theatre major at Benjamin T. Rome School of Music at The Catholic University of America, recognizes the importance of the training she’s getting in how to audition. “The workshops we have really train you well to get used to auditioning, how to present yourself best, and how to act like a professional actor instead of seeming like an inexperienced student. These skills help secure internships and make auditioning much less intimidating…Plus, the faculty will give feedback. This helps you know where you went right or wrong in the audition and how to improve it. In the real world, you will rarely, if ever, get that kind of feedback, so it is extremely helpful to have that in school!

Jimmy Mavrikes, a recent graduate of The Catholic University of America now starring in “Fiddler on the Roof” at the Arena Stage in Washington, DC, credits his undergraduate training in musical theatre with preparing him to deal with rejection. “More times than not, you will have people telling you ‘no.’ At first this is really difficult, but in time you realize it is just the business.”

Are you considering studying musical theatre at college? A realistic understanding of the competitiveness of the field is essential. According to Anne Evans Watson, whose studio focuses on Broadway-style singing, “There are about 10 spots in musical theatre programs for every 500 applicants. Most programs want confident, experienced young artists who sing well and have some good acting chops.”

Elise Morrow-Schap, a composer and triple threat performer herself, and Tom Pederson, singer, conductor, producer and head of the Music Theatre Division at The Catholic University of America, encourage students to “get help picking proper material that is age appropriate, vocally suitable and not beyond your capabilities.”

David Herendeen recommends that students get good coaching to prepare for auditions. Anne Evans Watson agrees, and adds that “Most of us can’t direct ourselves or choose and edit audition material for ourselves, so regular guidance and mentorship is imperative.”

By the same token, Scott Plate, an actor, director, and writer, warns that “Overly coached auditions are not usually successful.”

If Only I’d Known…

Working in musical theatre is “a hard working life that you have to love for the sake of the work, and not for the sake of ‘it’s fun’ or the thought of being ‘famous’ and ‘on Broadway,’” cautions Ann Evans Watson. David Herendeen adds: “Whether you end up working in straight theatre, musical theater, film/TV, or as a street mime, it will be as it always has been: a life that requires perseverance. This isn’t faith-based and has nothing to do with clicking your heels together three times and making a wish or praying. Instead, you have to build your reputation and place in life –– work at it and stick to it.”

What do current and recent students of musical theatre wish they’d known before entering their programs?

Alison Verhofstadt says she wishes she’d been better at time management. Figuring out how to balance classes, practice, and rehearsals with sleep and good self-care was tough. “Going into college with a really solid plan, complete with class schedules, homework and practice time, would have been a huge help.”

Jimmy Mavrikes wishes he’d taken dance and piano lessons when he was younger. “Catholic University definitely trained me well, but nothing is better than starting dance and piano when you are young. My parents wasted too much time and money driving me to baseball practice.”

Introductory music theory and aural skills taken before starting college would have helped Eryn McCoy prepare for what was ahead. With 20/20 hindsight she says, “Completing more general education requirements ahead of time would have given me more time to take extra acting and music classes.”

• When you walk into the room, smile and make eye contact with every person in the room. It shows you are confident and at ease. Take a moment once you state your name and song title, before nodding to the accompanist. This is your audition and you shouldn’t feel rushed. Make sure you’re ready and comfortable before you start singing, take a breath and create your world before starting the song.

Jump in with two feet. Welcome criticism because it will make you stronger. Greet every day with optimism, learn from your classmates, support the people you perform with, and make good friends.

• Be yourself  – listen to your mentors and assimilate what works for you and let the rest go. Have enough well-thought-out, well-rehearsed pieces so that you can stay interesting and relevant.

• Do not sing the most difficult song in your book! Bring a strong point of view to your material, tell the story and enjoy the time you have with us.

• Breathe. Listen. Take your moment. Don’t be afraid of stillness. Set three goals for yourself before you walk into the audition room. Instead of focusing on trying to figure out what the people behind the table think of you, work on accomplishing those personal goals you set for yourself. Always be prepared and always be early to auditions!

• Come prepared with everything. So many times in auditions the people behind the table liked me, but didn’t necessarily like my material. They will ask you for something else. At one of my auditions last season I was asked to do 4 songs out of my book and 3 monologues.

• We want to see someone that wants to give their all, but is not the perfect dancer. Whether it’s through your song choice, your monologue, your dance – we’re looking for that spark. We can polish the rough edges if there are any. We’re there on your side. Be prepared to add contemporary urban music styles to your repertoire. Music theater styles are expanding to include rap, hip hop, and house music. Increased stylistic versatility is a must.

“Success comes when preparation meets opportunity. Remember that being unique in this business simply means staying true to who you are.” 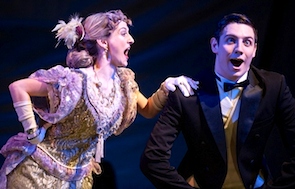 Paying the Bills between Shows

“We bring Life to our work, so whatever else you are doing, choose it and relish it because it will put bread on the table in the lean times and be a meaningful source of inspiration for the roles you play,” says Ann Evans Watson.

Some ways in which performers make ends meet when they’re not performing include:

Graduate school is typically not something musical theatre majors pursue fresh from an undergraduate degree. But some who discover a major gap in their skills and knowledge sometimes return to a graduate program. Others discover a new area of interest once they’re out in the field. For example, Elise Morrow-Schap and Tom Pederson encourage those interested in directing and management to consider graduate programs.

“The musical theater market expects young performers to enter into the industry, persevere, build on their academic foundation, and learn the tools of the trade that one can only get  ‘in the real world,”’ offers David Herendeen. “Ideally, grad school comes after you’ve gotten your nose bloodied by the real world, gotten some chops, and then realized you’re interested in a theoretical and academic exploration of the genre. The grad experience is always better after gaining some wisdom and perspective about the industry (and yourself) by the industry itself.”

“Be prepared to add contemporary urban music styles to your repertoire. Music theater styles are expanding to include rap, hip hop, and house music. Increased stylistic versatility is a must.” 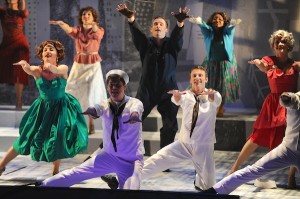 Participating Schools Where You Can Study Musical Theatre

Photos courtesy of: Benjamin T. Rome School of Music at The Catholic University of America