Touring with a Pit Orchestra

Touring with a pit orchestra is a career option for young musicians who opt for gaining travel and experience before settling down. Large national and international tours bring musical theatre to local audiences around the world. The pit orchestra is a key part of it all, along with the vocals, choreography, acting, extravagant set designs, and fantastic musical scores.

Touring orchestras for musicals are usually reduced in size from where they were originally staged, due to the cost of traveling. As a result, the musicians are typically required to perform at a high level of artistry on a number of instruments (“doubling”), and are expected to cover as many parts of the full score as possible.

Having a firm grasp of fundamental musical skills is essential, with the goal of performing the most consistent show possible. Presenters all over the world are promised a certain quality of show when they purchase a production, so a commitment to accuracy is essential. A very specific combination of skills is required on the musical side of things, to help create the ideal consistent performance the production company desires.

The musical theatre world, especially touring, places very high demands on its performers. It can be intolerant of fundamental errors. Also, the music supervisor may be unfamiliar with your abilities. Your first read-through of a piece may turn out to be your audition, and anyone not up to the required standard of performance will quickly be replaced. When a new performer is hired for a tour, there are often only a handful of music rehearsals before the show opens and goes on the road.

Top-notch sight-reading
Sometimes performers only see the music once before having to play in front of an audience.

Intonation
On an instrument with variable intonation (winds and strings), a firm grasp of just intonation and equal temperament is essential. Playing out of tune can cause strain on all performers, in the pit and on stage. When a show runs constantly, reducing even the slightest strain day-in and day-out can increase the endurance of all performers and prevent injury.

Blend
Sounding as one cohesive unit means matching styles (articulations, dynamics, time feel, timbre, off-page interpretation). It also requires following section leaders and the conductor. The best ensembles match all of these skills to tie into the period of the story, ultimately making the show more cohesive.

Ability to play to a click track
A contemporary addition to some shows is the use of a click track with the performance. This eliminates tempo deviations, and allows the orchestra to sync musical gestures with other aspects of the show such as lighting, videos, and other special effects. Playing to a click track can seem strange at first. But a familiarity with the practice is a new skill demanded by many shows.

Other Important Skills for Touring Musicians

While many of us feel like the musical world should ideally be a meritocracy, where only the most talented performers rise to the top, the reality of the business is far from this scenario. With an ever-increasing number of talented performers graduating from music schools, emphasis has shifted to interpersonal skills – especially for touring productions.

The unique scenario of traveling, eating, performing, and spending leisure time with those you work with is only found in a few industries. Maintaining relationships and having a good work life balance is necessary to prevent catastrophe backstage.

Being kind to yourself and others makes you a person people enjoy working with on a regular basis. You may not like the people you work with, but there is no reason to make the environment toxic, which affects everyone.

The work environment is not a place where you want to be subversive. Respectfully discussing any issue that comes up in the spirit of compromise is important. Maintaining a positive attitude keeps your ego in line. Receiving any criticism and taking direction well are important for continued work in the industry.

Being on time is essential for any large-scale tour, because failure to do so causes things to no longer run on schedule. It can be as simple as showing up to the bus on time when you leave a city, or being ready for sound check at the same time every day. The schedule exists to put on a good show, and by not following it you disrespect the story you want to tell to the audience.

Touring as a Career

Touring definitely presents its own unique challenges, but can be a very rewarding career. Many touring performers save considerable amounts of money while on the road. They avoid everyday expenses like rent, travel, and costs incurred when settled into one location. And after graduating, tours can be an excellent way to pay back student loans.

Brett McDonald performs on alto saxophone and flute on the current national tour of the Tony and Grammy award-winning musical, “Dreamgirls.” An award-winning saxophonist and composer himself, McDonald holds degrees in Jazz Saxophone from Rutgers University Mason Gross School of the Arts(M.Mus) and the University of North Texas (B.Mus)

“With an ever-increasing number of talented performers graduating from music schools, emphasis has shifted to interpersonal skills – especially for touring productions.”

You never know who’s going to help you get your next great gig. Or how one gig will lead to the next. According to Brett McDonald, “I got a call to sub on a community theater production of ‘The Full Monty.’ I could’ve turned down that $50 gig, but I didn’t because despite being overqualified, I knew I was an unproven substitute at that point. Mostly the musicians were music teachers from local schools on secondary instruments, but one night a DMA clarinet major at Rutgers subbed on the second reed book. He offered me work at a professional theatre on the beach for the summer and I was able to log the credits and connections that brought me to ‘Dreamgirls.’

“As for ‘Dreamgirls,’ I was referred by a friend from University of North Texas who was also living in New York City at the time. He was offered the gig, but had to turn it down due to other commitments for the duration of the tour.” 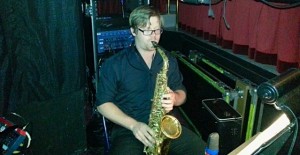 1. Ensembles were probably the most valuable classes for my role with “Dreamgirls.” Practicing music, reading, and running sectionals were very important to gain the experience necessary to play my role with confidence.

2. Course-wise, I wish that I’d taken lessons on my doubles, so that I’d have more formal training on those instruments. I also really wanted to take counterpoint, but always had full semesters.

3. Performing as much as possible was extremely helpful. Professional situations were valuable for learning the people skills necessary for touring. Playing in the 2011 Disneyland Resort All-American College Band was definitely an experience that helped in that regard.