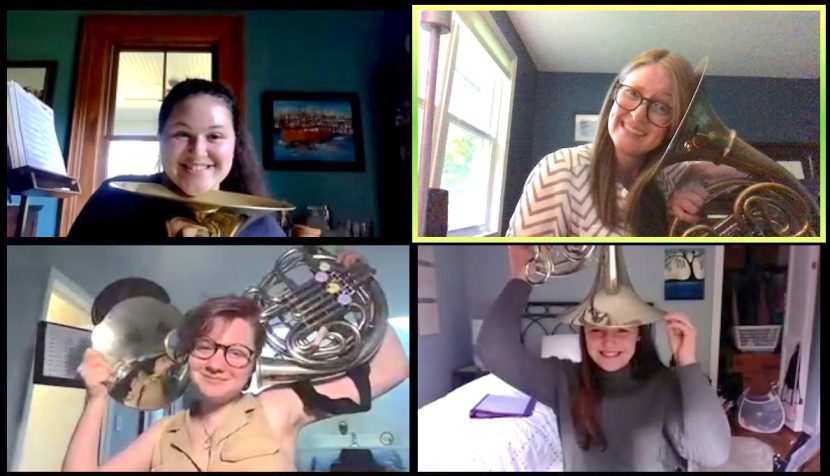 Will safety concerns necessitate virtual summer music programs again for 2021? If so, students and teachers will be far better prepared after more than a year of online teaching.

We spoke with individuals involved in last summer’s virtual music programs to learn more. While all agreed that in-person programs are preferable, there were a surprising number of benefits to online programs.

Most programs found synchronous instruction more useful, i.e., where all students, regardless of their location, meet at the same time. While inconvenient if you live in a location one or more time zones away from where the program is hosted, synchronous programs appear to lead to more social interaction and interactive learning. And feedback is given and received in an easier and more useful way, by students as well as  teachers.

“The greatest challenge with that decision was that our international students, especially from Asia, had to make significant changes to their lives in order to participate,” says Petar Kodzas, who works with Eastman School of Music’s Summer@Eastman program as director of its Summer Classical Studies. “We addressed that challenge by recording sessions and accommodating additional consultation with faculty.”

Dave Walter, who heads the LYNX Summer Music Programs through the University of Colorado Denver, found Zoom breakout rooms useful for working with voice, keyboarding and songwriting classes with students “individually or in small groups.” Audio production-related classes were particularly easy to adapt to the virtual environment.

Randy Kapralick, coordinator of the Pre-College Summer Institute at University of the Arts School of Music (UArts), also found breakout rooms useful. “We offered a mix of instrument-specific group lessons coupled with one-on-one instruction in breakout rooms. This enabled our students to grow a sense of community with their counterparts as well to receive personal attention with their teacher. When the teacher was in a breakout room with one student, the rest of the students were working on a daily project and would share what they produced at the next group lesson.”

Pennsylvania high school senior Evelyn Hupka, a French horn player, attended the Summer@Eastman program in Classical Studies on campus in 2019. While she missed the in-person experience of performing with others in 2020, she found last summer’s virtual program “just as rigorous as it was in person” and says that “virtual programs can still have a huge positive impact on one’s growth as a musician.”

Hupka gained what she’d hoped for: “to further my knowledge in music theory, analysis, and history, as well as understanding how all three of those topics are bridged and relate to each other.” She also benefited from Alexander Technique training and learning about various careers in music.

By last summer, many programs had figured out how to best utilize existing technology for online learning. Conrad Kehn, who directs the Lamont Summer Academy at Lamont School of Music, found the collaboration platform known as Soundtrap to be quite useful for their chamber ensembles. “One of our faculty coaches found a really inventive way to use this platform to focus on the same skills that we would if rehearsing together,” he says. “Students produced layered recordings that sync within seconds, recreating in online format the spirit of camaraderie and social interaction of an in-person chamber group.

“A key element in the teaching,” he continues, “is the ‘pacing track’ – recorded by the coach with all the dynamics, articulations, rubato, and transitional preparation that would be taught in person. As the student learns their part, they transition to practicing with the pacing track so as to begin to learn the flexibility needed for an artistic performance.”

There’s no question that students and teachers missed the camaraderie and growth that in-person summer experiences provide. But without the time and energy it takes to adjust to a new setting away from home, students were able to jump right into whatever they were learning.

Drummer Josh Baum, a junior from California, says that summer programs offered virtually made it possible for him “to do multiple summer camps that I couldn’t have logistically done otherwise.” He filled his summer with programs offered in Boston, Denver and Miami: the 5-week Aspire program through Berklee College of Music; two LYNX camps at CU Denver; and the University of Miami Frost School of Music’s Advanced Rock Performance program. He came away learning “how to record better, how to master/mix my music, and how to post it on the internet for people to hear. I also learned creative ways to collaborate with people online, which I have been doing now for months.”

• We found that it worked well to do the camp orientations through Zoom the evening prior to the camp’s start date. This was an easy way to get everyone all the info that they needed prior to the camp so that instruction could start right away the next morning. – Dave Walter, CU Denver LYNX Camps

• With the absence of live, in-person interaction, we were able to do a deeper dive into the cultural and historical implication of many aspects of the musical concepts we presented to the students. – Randy Kapralick, UArts

• Some faculty were able to observe things that they could not in a studio setting without getting awkwardly close to students. – Petar Kodzas, Summer@Eastman

• One benefit that I found with a virtual platform is the ease of communication between students and teachers when class is not in session. Not only were teachers reachable by email, but you could also send shorter messages via Google Classroom, which were often quicker. There were obvious limitations with the lack of ensemble experience and social interaction, but there was still a community aspect, especially between studio mates. – Evelyn Hupka, student, Summer@Eastman

• It is 2021, every musician should know how to operate a DAW, and should be able to make and share reasonably high-quality audio and video recordings of themselves. Virtual programs raised the floor on what we expected of ourselves and our young musicians. – Conrad Kehn, Lamont Summer Academy

• Faculty were able to address topics indirectly related to playing that often don’t get deserved time in an in-person setting such as historical background, deeper analysis etc. – Petar Kodzas, Summer@Eastman

• It was really easy to bring in music industry guest artists for presentations via Zoom. Doing it this way is much easier and less of a time commitment for guest artists than when they have to come to us when the camp is held on campus. – Dave Walter, CU Denver LYNX Camps

• We became quite skilled at supporting our students in this tech environment, from helping them find discount packages on mics and headphones, to teaching them how to sound their best virtually. We also added entrepreneurship, mentoring and tech classes to our offerings. One silver lining is that even though we hope to be in person, we will always offer a remote version of our program. – Conrad Kehn, Lamont Summer Academy